CJCU located half degree south of the Tropic of Cancer and has a climate that is transitional between humid subtropical and tropical. The city has high humidity and fairly warm temperatures year-round, but there are seasons with cooler weather between the months of November to March. During this time, the cold fronts from the Eurasian mainland bring dips in temperature that last for several days at a time, so students should be prepared and have jackets and warm bedding with them. 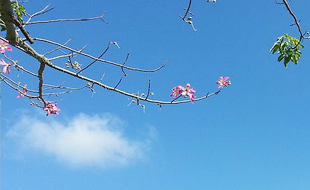 Compared to Taipei, Tainan relishes a large number of sunny days. The UV index is also generally high, so students should be careful and protect their skin, especially when swimming or riding on motorcycles.

Most of Tainan’s yearly rainfall falls in the months of April-September. A period of rainfalls traditionally referred to as the “plum rains” may begin in May or June. Typhoons are most common from July to September, but the Tainan area is generally well-protected from these storms by Taiwan’s Central Mountain Range. In the mountains itselves, heavy rains along with typhoons often wash out roads,  causing avalanche. So, during typhoons, people should stay out the mountain areas (and away from the coasts). They should also store several days' worth of water, because typhoon-related landslides may damage the water reservoirs.